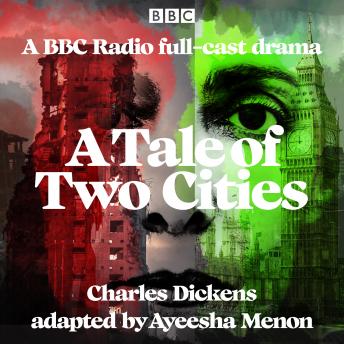 A Tale of Two Cities: A BBC Radio full-cast drama

2011, Syria. The Arab Spring is underway, and after a wave of peaceful protests, President Assad agrees to a release of political prisoners. Freed after 30 years, Dr Mahmoud is taken in by Taghreed and Emad Daffar, and brought to England by his old friend Jarvis Lorry and the daughter he has never met, foreign correspondent Lina. But his years of suffering have left him a broken man.

Back in London, Jarvis convinces his nephew Sid Carton, a feckless but brilliant barrister, to defend a young Syrian émigré doctor, Shwan Dahkurdi, against charges of supporting terrorism. Lina and Shwan fall in love, only for his dark family secret to tear them apart... Meanwhile, convinced that only Lina gives his life meaning, Sid confesses his unrequited love, promising to do anything for her and those she loves.

As the city of Aleppo turns into a battleground, Taghreed becomes increasingly involved with the rebels of the Free Syrian Army. Her desire for justice - and her obsessive thirst for vengeance - will have devastating repercussions...

A powerful portrayal of personal sacrifice set against the turbulent backdrop of political change, Dickens' classic novel is as resonant today as when it was written. The redemption of flawed humanity is at the heart of award-winning writer Ayeesha Menon's riveting reimagining, spanning five years and with a seamlessly shifting perspective between Aleppo and London. Provocative, powerful and moving, this drama won a BBC Drama Audio Award for Best Adaptation, and stars Fatima Adoum, Lara Sawalha, Phil Davis, Khalid Abdalla, Shaun Parkes and Nadim Sawalha.

This title is due for release on October 21, 2021
We'll send you an email as soon as it is available!