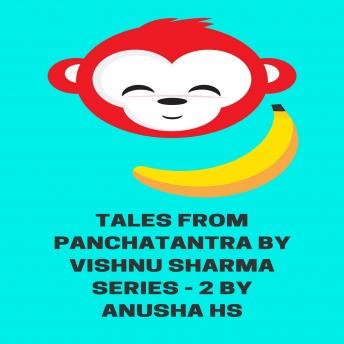 Tales from Panchatantra by Vishnu Sharma series -2: From various sources

In South India there was a city named mahilaaropa. A king named Amara Shakthi was ruling the city of mahilaaropa. He was very friendly with his citizens. He was a great visionary and a man with valour. The citizens of his Kingdom were always happy. But the king himself was not happy. He had no contentment. Because that King had three sons who were very stupid. The elder one was very stubborn. His name was bahu shakti. The second one was a shrewd fellow. His name was ugrashakti. The third one was a wicked fellow who had inculcated only bad habits. His name was Ananta Shakti. Moreover, the three sons of the King were egoistic as they were the sons of a king. Because of this they did not obtain any kind of knowledge and education. Though they were aged between 16 and 18 years, they did not know how to write. Like this they used to lead their lives. The king Amara Shakti being the father of those three princes did not succeed in his attempt of making them knowledgeable and educating them even though he tried his level best. Because those three children of the king did not have any earnestness to get educated, they disrespected their Guru or teacher. So, all the Gurus or teachers started rejecting the offer of teaching the three children of the king. Though they were in youth they were slow, egoistic and had inculcated bad habits in them. As the time had passed away, they had grown like wild bulls. Hearing about the nature of the three princes the kings belonging to the neighboring kingdoms hesitated to give their daughters in hand for conducting marriage ceremony of their daughters. The king Amara shakti went into a chronic depression and lost his peace of mind.

He struggled and trembled out of fear thinking about their son's future.