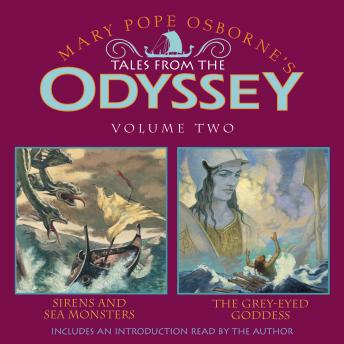 Tales From the Odyssey #2

Odysseus and his men have done what no other mortals have done: returned alive from the terrifying Land of the Dead. Armed with warnings and advice from the ghost of the prophet Tiresias, Odysseus is determined to finally sail home to Ithaca. But the enchantress Circe tells him the Greeks will face even more horrors on their journey, including an encounter with Scylla, the six-headed monster, and Charybdis, the deadly whirlpool. Who will survive these terrors -- and how?

Odysseus is trapped on the island of the sea goddess, Calypso. The beautiful goddess wants him to forget his wife and son and marry her, but he is determined to return home. Back in Ithaca, Odysseus' wife, Penelope, and son, Telemachus, desperately fend off suitors who want to marry Penelope in order to take control of Odysseus' island. It is only with the help of the gray-eyed goddess Athena that they can hope to ever become a family again.

Tales From the Odyssey #2