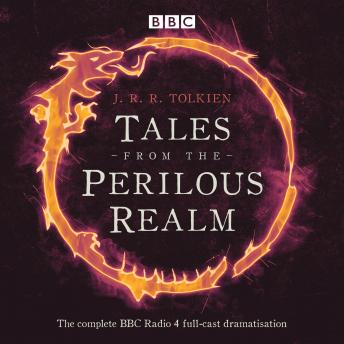 Four BBC radio dramatisations starring Michael Hordern as Tolkien - plus a special archive compilation exploring Tolkien's life and work
The tales in this collection all reflect an aspect of what Tolkien himself called 'the perilous realm of Faerie'. Adapted for radio by Brian Sibley, co-writer of the acclaimed BBC radio production of The Lord of the Rings, they are rich in myth, magic and adventure. Among the supporting cast are Brian Blessed, Nigel Planer, Sorcha Cusack, Paul Copley and James Grout.
In Farmer Giles of Ham, having accidentally shot a giant, Farmer Giles' brave reputation is tested by Chrysophylax the dragon. In Smith of Wootton Major, a young boy eats a piece of cake containing
a silver star, and is granted access to the magical land of Fäerie. Leaf by Niggle is a thought-provoking allegory of the creative process, and The Adventures of Tom Bombadil features Tom and the Hobbits in scenes from The Lord of the Rings which were not included in the BBC Radio 4 dramatisation.
Also included is J R R Tolkien: An Audio Portrait, in which Brian Sibley draws together interviews from radio and television programmes featuring the author himself, his original publisher Rayner Unwin, his biographer Humphrey Carpenter and many others torelate the story of both Tolkien the man and the worlds he created.
Duration: 5 hours 50 mins