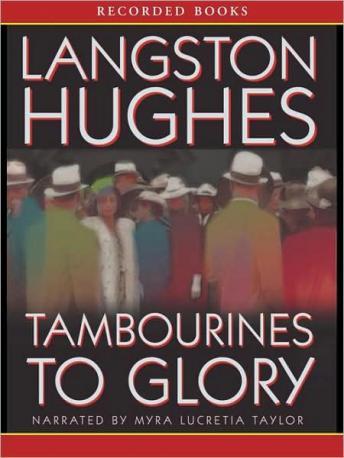 Poet, author and playwright Langston Hughes was a key figure in the Harlem Renaissance in the late 1950s. His writings capture the spirit of black culture as it struggled for recognition and acceptance. Tambourines to Glory is a morality fable illustrating the perpetual fight between good and evil. Angelic Essie Belle Johnson and devilish Laura Reed both agree that they need to do something to spice up their lives-and earn more money. So, they start their own church on the street in front of their Harlem apartment. With Laura's gift for performing and Essie's melodious voice, the two quickly become a hit and must move their services into a renovated theatre. But as their congregation grows, a host of misfits enter the scene-some honest, and others who just want a piece of the pie. Featuring a stunning performance by Myra Lucretia Taylor, Tambourines to Glory is a classic of American literature and a must listen for anyone interested in the history of African-American culture.