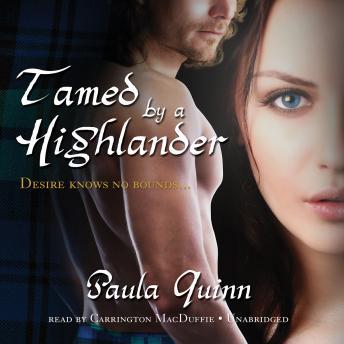 Tamed by a Highlander

Mairi MacGregor hoped to never again lay eyes on Connor Grant. She was ten and one when he promised her he would one day build them a home in her beloved Highlands, spending their lives together. But she was ten and seven and foolishly weeping when he rode out of the Highlands to join the English Royal Army. She wouldn’t be so foolish as to waste tears on him now. Devoted to her beloved Scotland, Mairi believes Connor is a turncoat and a liar, and there’s nothing she despises more than that. No one but her brother, Colin, knows that Mairi is part of a rebel militia, quietly gaining intelligence and exposing traitors to Scotland using whatever means necessary. Now, at King James’ court in England, she’s determined to keep her missions secret and keep the one man with the power to bring her to her knees at arm’s length—her heart be damned.
Royal Captain Connor Grant never wanted to leave Mairi, but he’d had no choice. It was his duty to serve his family’s name, and no matter how he asked her to wait, his lass had refused. He’s never stopped loving her, though, and seeing the beautiful, passionate, yet mysterious woman she’s become at court has taken his breath away. But King James has powerful enemies, and Connor isn’t deaf to the whispers of treachery in court. So when the king disappears in the middle of the night with Mairi’s brother as his only protection, Connor suspects Mairi is involved. As one secret after another unravels about the king’s whereabouts and the whispers of a coup grow ever stronger, can Connor trust the one woman who still has his heart?

Tamed by a Highlander