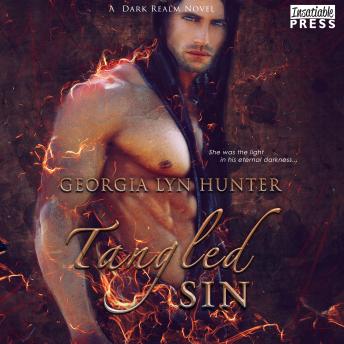 Tangled Sin is part of the Fallen Guardians' World.

In a world of encroaching darkness and carnal hunger, a deadly sin awakens…

Bound to a legacy he cannot escape, Riley is a demon unlike any other. With each passing century, his soul grows darker until the seductive trouble-magnet, Saia Sen-Grayson, stumbles into his path and throws his entire world off kilter. But danger has a way of finding him and destroying anything worthwhile in his life.

The biggest challenge in Saia’s life is evading her matchmaking socialite mother. Then she crashes into the sexiest man in her aunt’s building. One look into his striking green eyes and her fleeing days skid to a halt, except she gets more than she bargains in the sexy, tattooed bartender.
And neither can deny the burning attraction between them.
When his tainted past closes in on him, Riley’s forced to make the toughest decision ever to keep her safe. Then Saia’s hauled by a deadly adversary into his dark and treacherous world of Stygia—a place of old betrayals. Now Riley must face his past and accept his future in order to save the woman who belongs to him.

Tangled Sin is a full length steamy novel, and a part of the Fallen Guardians' series.