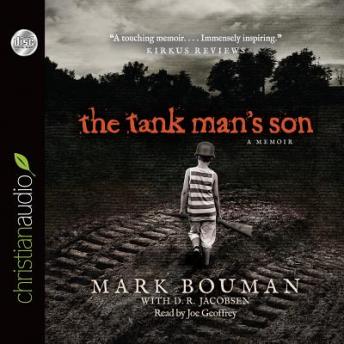 The Tank Man's Son: A Memoir

In the tradition of The Glass Castle and Angela’s Ashes comes the most unforgettable memoir you’ll read this year!“What did it mean to be the Tank Man’s son? To grow up overwhelmed by my father’s presence and personality? It was as if I didn’t exist, as if I was just something else for my father to crush.”So begins the haunting memoir of Mark Bouman as he recounts the events of his childhood at the hands of his larger-than-life, Neo-Nazi father in brilliant, startling detail. From adventure-filled days complete with real-life war games, artillery fire, and tank races to terror-filled nights marked by vicious tirades, brutal beatings, and psychological torture, Mark paints a chilling portrait of family life that is at once whimsical and horrific—all building to a shocking climax that challenges even the broadest boundaries of love and forgiveness.An epic tale of redemption and reconciliation, The Tank Man’s Son is a literary tour de force that is sure to become an instant classic.