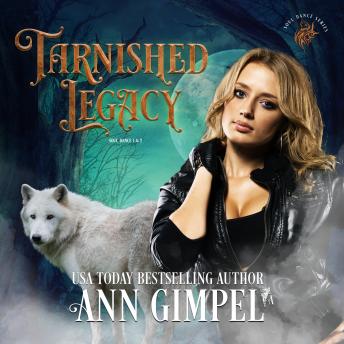 Tarnished Beginnings, the prequel and first book of the Soul Dance series, is included in this audiobook, so you'll get two books for the price of one!Tarnished Beginnings1700s Egypt is a haven for magic-wielders of all kinds. Vampires hold court, staying one step ahead of the priests who want them dead. Gypsy caravans roam the Nile, plying their wares.Tairin Jabari was born in a caravan and has always believed she's Romani. Why wouldn't she? Her mother and father never suggested otherwise. The Rom have harsh rules. When Tairin's first shift catches her unaware at thirteen, her father disappears, and the elders move with deadly speed to punish her mother for mating outside the blood.Hurt, lost, confused, and fearing for her own life, Tairin runs away, leaving her mother's smoking funeral pyre behind. With her survival on the line every single day, she and her wolf face hard choices.Tarnished LegacyHalf Romani, Tairin's no stranger to hiding her mixed blood from gypsy caravans. What she can't hide is her perpetual youth, courtesy of her shifter heritage. She's overstayed her welcome where she is, but Germany is at war, and travel has become impossible for everyone targeted by the Reich.Elliott's clairvoyance is strong. Seer for all the caravans in Germany, he catches Tairin eavesdropping outside their leader's wagon. He should turn her in, but he can't bring himself to do that. Instead, he interrogates her. Her magic is different, but he can't figure out quite what she is.Any association between Romani and shifters is forbidden. Tairin should leave right now, tonight-before he discovers what she is and destroys her.Read Less