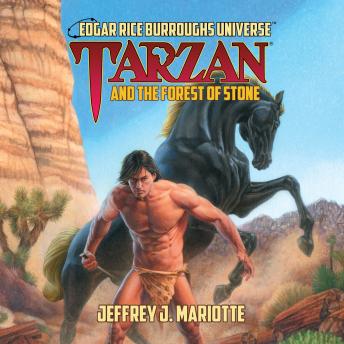 Tarzan and the Forest of Stone

After Tarzan departs Southern California following a visit with a dear friend, bandits mysteriously dressed as cowboys straight out of the Old West waylay his train and make off with a precious Native American artifact-taking the daughter of the relic’s owner hostage in the process. Now Tarzan must set off on foot from the wrecked and twisted ruins of the train in pursuit of the criminals, making his way across the American Southwest, a land as different from his jungle homeland as can be imagined. But even as Tarzan closes in on his prey, a ruthless killer follows close at his heels, intent on bringing an end to the legendary Lord of the Jungle once and for all.

THE FIRST UNIVERSE OF ITS KIND
A century before the term “crossover” became a buzzword in popular culture, Edgar Rice Burroughs created the first expansive, fully cohesive literary universe. Coexisting in this vast cosmos was a pantheon of immortal heroes and heroines—Tarzan of the Apes, Jane Porter, John Carter, Dejah Thoris, Carson Napier, and David Innes being only the best known among them. In Burroughs’ 80-plus novels, their epic adventures transported them to the strange and exotic worlds of Barsoom, Amtor, Pellucidar, Caspak, and Va-nah, as well as the lost civilizations of Earth and even realms beyond the farthest star. Now the Edgar Rice Burroughs Universe expands in an all-new series of canonical novels written by today’s talented authors!

This title is due for release on August 23, 2022
We'll send you an email as soon as it is available!