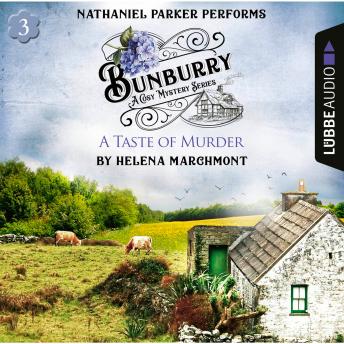 Miss Marple meets Oscar Wilde in this new series of cosy mysteries set in the picturesque Cotswolds village of Bunburry. In 'A Taste of Murder,' the third Bunburry book, a local beef farmer is found dead and Betty Thorndike, vegetarian and Bunburry's only Green Party member, is in the frame. Despite what everyone thinks, Betty is absolutely not Alfie McAlister's girlfriend. But Alfie knows what it's like to be wrongly accused, and enlists the help of his fellow amateur detectives, Liz and Marge, to find out who's responsible. There's just one problem about a farm-based investigation - Alfie's scared of cows ... Nathaniel Parker, born in 1962, graduated from the London Academy of Music and Dramatic Art and went on to join the Royal Shakespeare Company. His television career began in 1988 when he played Flying Officer 'Flash' Gordon in the LWT mini-series Piece of Cake. He is also the lead in the BBC series Inspector Lynley Mysteries, based on the novels by Elizabeth George. Nathaniel Parker has an extensive list of audio books to his credit, ranging from the classics of Charles Dickens and Thomas Hardy to more modern writings and children's books.