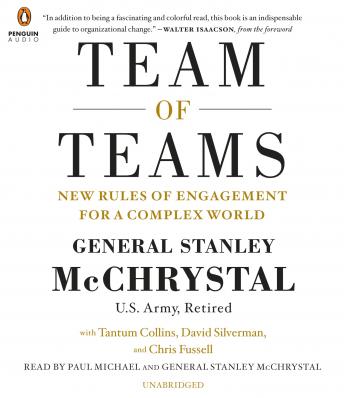 Team of Teams: New Rules of Engagement for a Complex World

Former General Stanley McChrystal held a key position for much of the War on Terror, as head of the Joint Special Operations Command. In Iraq, he found that despite the vastly superior resources, manpower, and training of the U.S. military, Al Qaeda had an advantage because of its structure as a loose network of small, independent cells. Those cells wreaked havoc by always staying one step ahead, sharing knowledge with each other via high-tech communications.

To defeat such an agile enemy, JSOC had to change its focus from efficiency to adaptability. McChrystal led the transformation of his forces into a network that combined robust centralized communication (“shared consciousness”) with decentralized managerial authority (“empowered execution”).

Now he shows not only how the military made that transition, but also how similar shifts are possible in all kinds of organizations, from large companies to startups to charities to government agencies. In a world of rapid change, the best organizations think and act like a team of teams, embracing small groups that combine the freedom to experiment with a relentless drive to share what they’ve learned.

McChrystal and his colleagues explain their process for helping organizations embrace this model. They also share fascinating research and examples from settings as diverse as emergency rooms and NASA’s mission control center.

Team of Teams: New Rules of Engagement for a Complex World