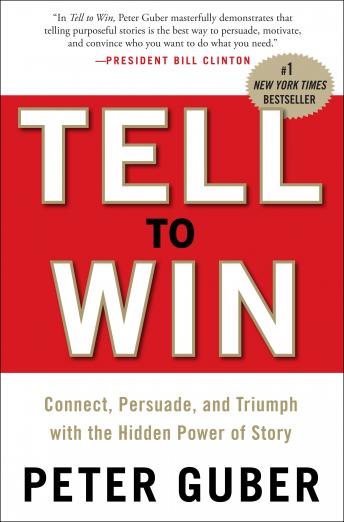 Tell to Win: Connect, Persuade, and Triumph with the Hidden Power of Story

Today everyone—whether they know it or not—is in the emotional transportation business. More and more, success is won by creating compelling stories that have the power to move partners, shareholders, customers, and employees to action. Simply put, if you can’t tell it, you can’t sell it. And this book tells you how to do both.

Historically, stories have always been igniters of action, moving people to do things. But only recently has it become clear that purposeful stories—those created with a specific mission in mind—are absolutely essential in persuading others to support a vision, dream or cause.

Peter Guber, whose executive and entrepreneurial accomplishments have made him a success in multiple industries, has long relied on purposeful story telling to motivate, win over, shape, engage and sell. Indeed, what began as knack for telling stories as an entertainment industry executive has, through years of perspiration and inspiration, evolved into a set of principles that anyone can use to achieve their goals.

In Tell to Win, Guber shows how to move beyond soulless Power Point slides, facts, and figures to create purposeful stories that can serve as powerful calls to action.  Among his techniques:

* Capture your audience’s attention first, fast and foremost
* Motivate your listeners by demonstrating authenticity
* Build your tell around “what’s in it for them”
* Change passive listeners into active participants
* Use “state-of-the-heart” technology online and offline to make sure audience commitment remains strong

After listening to this extraordinary mix of voices, you’ll know how to craft, deliver—and own—a story that is truly compelling, one capable of turning others into viral advocates for your goal.

Tell to Win: Connect, Persuade, and Triumph with the Hidden Power of Story