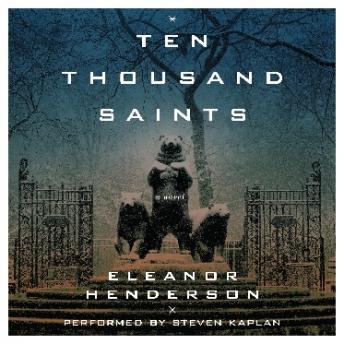 “Eleanor Henderson is in possession of an enormous talent which she has matched up with skill, ambition, and a fierce imagination.  The resulting novel, Ten Thousand Saints, is the best thing I’ve read in a long time.”
—Ann Patchett, bestselling author of Bel Canto and State of Wonder

A sweeping, multigenerational drama, set against the backdrop of the raw, roaring New York City during the late 1980s, Ten Thousand Saints triumphantly heralds the arrival a remarkable new writer. Eleanor Henderson  makes a truly stunning debut with a novel that is part coming of age, part coming to terms, immediately joining the ranks of The Emperor’s Children by Claire Messud and Jonathan Lethem’s The Fortress of Solitude. Adoption, teen pregnancy, drugs, hardcore punk rock, the unbridled optimism and reckless stupidity of the young—and old—are all major elements in this heart-aching tale of the son of diehard hippies and his strange odyssey through the extremes of late 20th century youth culture.