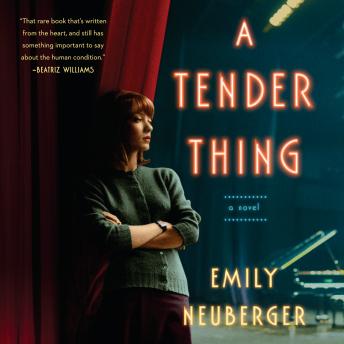 An exhilarating debut novel set under the dazzling lights of late 1950s Broadway, where a controversial new musical pushes the boundaries of love, legacy, and art.

Growing up in rural Wisconsin, Eleanor O'Hanlon always felt different. In love with musical theater from a young age, she memorized every show album she could get her hands on. So when she discovers an open call for one of her favorite productions, she leaves behind everything she knows to run off to New York City and audition. Raw and untrained, she catches the eye of famed composer Don Mannheim, who catapults her into the leading role of his new work, 'A Tender Thing,' a provocative love story between a white woman and black man, one never before seen on a Broadway stage.

As word of the production gets out, an outpouring of protest whips into a fury. Between the intensity of rehearsals, her growing friendship with her co-star Charles, and her increasingly muddled creative--and personal--relationship with Don, Eleanor begins to question her own naïve beliefs about the world. When explosive secrets threaten to shatter the delicate balance of the company, and the possibility of the show itself, Eleanor must face a new reality and ultimately decide what it is she truly wants.

Pulsing with the vitality and drive of 1950s New York, Emily Neuberger's enthralling debut immerses readers right into the heart of Broadway's Golden Age, a time in which the music soared and the world was on the brink of change.