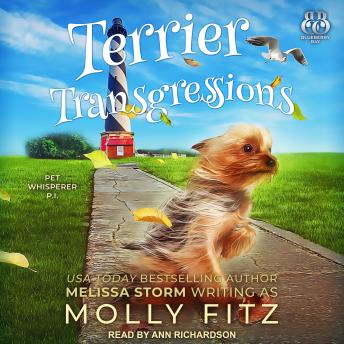 I'm finally coming to terms with the fact I can speak to animals, even though the only one who ever talks back is the crabby tabby I've taken to calling Octo-Cat. What I haven't quite worked out is how to hide my secret . . .

Now one of the associates at my law firm has discovered this strange new talent of mine and insists I use it to help defend his client against a double murder charge. To make things worse, Octo-Cat has no intention of helping either of us.

Our only hope rests on a spastic Yorkie named Yo-Yo, who hasn't quite figured out his owner is dead. Can we find a way to get Yo-Yo to help solve the murder without breaking his poor doggie heart?

This is such a fun and fascinating cozy mystery! If one is seeking a cozy to relax over, laugh at, and still ponder whodunit, look no further. Angie, a paralegal, had an incident recently that changed her life. Not only can she talk with animals, but she can hear and understand them! Including Octo-Cat, who she now cares for after helping the “crabby tabby” find who killed his owner. It doesn’t hurt that she gets paid a sweet sum every month to care for him, but keeping the feline in the manner he is accustomed, including Evian from the bottle, is no small cost. The darling boy called Angie at work from his iPad one day, most distressed, as there was a fly in his Evian. She thought everyone in the office was out to lunch, otherwise she wouldn’t have answered at her desk. Her new pet whisperer status is kept a secret from almost everyone, especially those at work. Oops. The new, very debonair attorney, Charlies Longfellow III happened upon Angie as she tried to problem-solve the fly in the water with the hoity-toity kitty. It doesn’t take long for the lawyer to “get” that Angie and Octo-Cat were conversing. In exchange for his silence, she has to help him with a little project. Charles has a new client, a young man accused of murdering a couple in the home they were selling. Charles has come across the traumatized pup of the former owners, Yo-Yo, a neurotic Yorkie who still wants to go back home. Yo-Yo may be the only being who knows who really killed them. Angie’s end of the bargain? She, with help from Octo-Cat, need to help Yo-Yo lead them to the real bad guy. Wow. No small request there! The characters – in this case Angie, Charles, Octo-Cat, Yo-Yo, and the realtor are defined as needed for their roles. Octo-Cat sounds like a little monster at times!! There might be times it’s good that I don’t understand what my cats say! He and Angie are starting to grow on each other, so I am looking forward to seeing what the future holds for their relationship. Angie has been crushin’ on Charles and tries to act interested only in the case they are working on without sticking her foot in her mouth. With regards to the narrator on the audiobook version, I really like her! She captures the engaging and delightful personality of Angie and Octo-Cat’s ‘tude. The mystery is a challenge; I didn’t figure it out! I highly recommend this to anyone who likes hard-to-solve mysteries, LOL humor, feisty cats, and sweet, intelligent heroines. From a thankful heart: I received a complimentary copy of this audiobook; a review was not required (also have the e-book).