The Terrorist Next Door: How the Government Is Deceiving You about the Islamist Threat 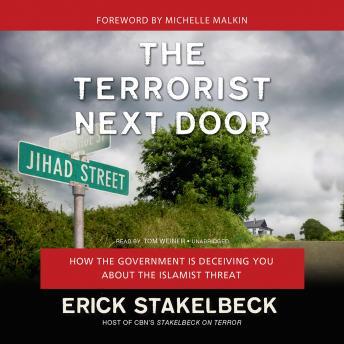 Al-Qaeda doesn't care about "Hope" and "Change."
The threat of terrorism in America, the Obama administration assures us, is contained and controlled. Attempted attacks like the Times Square bombing, the "underwear bombing" on a flight over Detroit, and the attack on a Christmas-tree-lighting ceremony in Oregon were all isolated plots that failed. In the words of Homeland Security secretary Janet Napolitano, "The system worked."
Don't believe it. In The Terrorist Next Door, investigative reporter Erick Stakelbeck exposes the staggering truth about our national security: the Obama administration is concealing and whitewashing the enormous terrorist threat growing right here within America's borders.
If you believe terrorism is only a problem for other countries, Stakelbeck's on-the-ground reporting will open your eyes. He has been inside America's radical mosques, visited US-based Islamic enclaves, and learned about our enemies by going straight to the source-interviewing al-Qaeda-linked terrorists themselves. In this shocking book, Stakelbeck reveals:
-How Islamic radicals have established separatist compounds and even jihadist training camps throughout rural America
-That an overt disciple of Iran's Ayatollah Khomeini now leads one of the largest mosques in America
-How mega-mosques aren't just planned for Ground Zero-they're being built in the heart of the Bible Belt as part of a plan for Islamic domination
-Program to recruit Americans into terror groups
-How the Obama administration's beguiling counter-terrorism policies are increasing the threat of another 9/11
The Terrorist Next Door sounds the alarm on a growing threat to every American-one that the US government refuses to face honestly or even to name. As we struggle against a relentless and adaptable Islamist enemy that is committed to destroying our nation, we can't say we weren't warned.

Terrorist Next Door: How the Government Is Deceiving You about the Islamist Threat