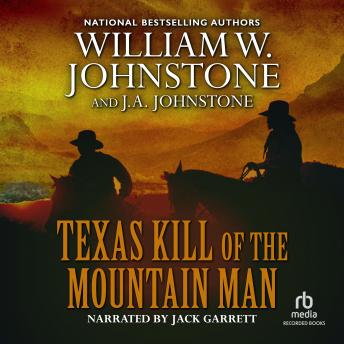 Texas Kill of the Mountain Man

Smoke Jensen: The Mountain Man, is the most enduring of the Johnstones' series and their most beloved character, known to set the standard for Western adventure. In this brand new installment, Smoke Jensen's epic battle for justice in the heart of the American Frontier takes him deep into the heart of Texas, where justice comes from the barrel of a gun... Welcome to Texas. Now Go Home. Smoke Jensen has met some down-and-dirty, murdering prairie scum over the years. But this time it's personal and it's bloody-and going to get bloodier. First, they stole fifty of the hundred horses Smoke delivered to his old friend Big Jim Conyers in Tarrant County, Texas. Then they stole two thousand cattle from Big Jim . . . and killed him just for the fun of it. Now they're going to pay . . . The leader of this unholy band of devils is Delbert Catron-but everyone calls him The Professor. Whatever he's called, he leads the most ruthless gang of vicious kill-crazy desperadoes this side of the border. Hellbent on avenging his friend's murder, nothing will stop Smoke Jensen from hunting down these killers. And celebrating justice . . . Live Free. Read Hard'

Texas Kill of the Mountain Man