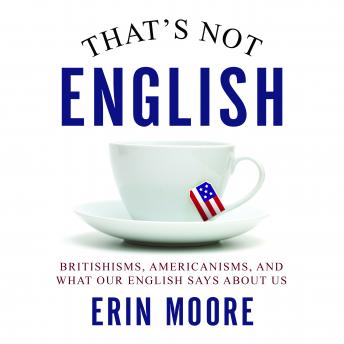 That's Not English: Britishisms, Americanisms, and What Our English Says About Us

An expat's witty and insightful exploration of English and American cultural differences through the lens of language that will leave readers gobsmacked
In That's Not English, the seemingly superficial differences between British and American English open the door to a deeper exploration of a historic and fascinating cultural divide. In each of the thirty chapters, Erin Moore explains a different word we use that says more about us than we think. For example, 'Quite' exposes the tension between English reserve and American enthusiasm; in 'Moreish,' she addresses our snacking habits. In 'Partner,' she examines marriage equality; in 'Pull,' the theme is dating and sex; 'Cheers' is about drinking; and 'Knackered' covers how we raise our kids. The result is a cultural history in miniature and an expatriate's survival guide.

American by birth, Moore is a former book editor who specialized in spotting British books-including Eats, Shoots & Leaves-for the US market. She's spent the last seven years living in England with her Anglo American husband and a small daughter with an English accent. That's Not English is the perfect companion for modern Anglophiles and the ten million British and American travelers who visit one another's countries each year.

That's Not English: Britishisms, Americanisms, and What Our English Says About Us