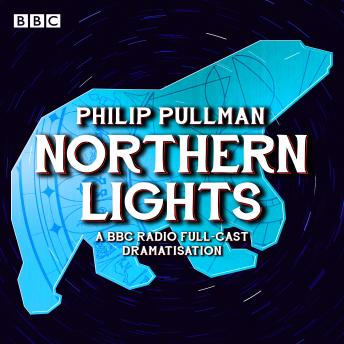 The award-winning His Dark Materials trilogy is a breathtaking epic adventure spanning a multitude of worlds. Northern Lights, the opening instalment, sees Lyra and her shape-changing daemon embark on a dangerous quest. In Oxford, Lyra learns that children are being kidnapped by the mysterious Gobblers. When her friend Roger vanishes she determines to find him, and is given a powerful alethiometer which can reveal the truth in all things. After discovering that the adults around her are not what they seem, Lyra and Pantalaimon join forces with a band of Gyptians. Travelling north they encounter witch-queens and armoured bears, before being captured and taken to Bolvangar – where children are being used in terrible and secret experiments... Gripping, full of suspense and often funny, this BBC Radio 4 dramatisation has an all-star cast including Terence Stamp, Emma Fielding, Bill Paterson, Kenneth Cranham, and Ray Fearon.

I absolutely love this book, an amazing magical story that sets the scene and introduces you into the world of Philip Pullman. The narrator was good but I felt the volume fluctuated too much with characters whispering ect. It’s not as good as the full story.

I think this dramatisation was amazing