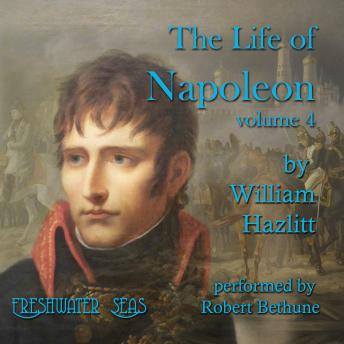 The Life of Napoleon: Volume 4

In this, the fourth volume of the work, William Hazlitt takes us through the the great turning point in Napoleon's life: his invasion of Russia. He shows us how the situation of Europe at that time: England controlling the sea, France controlling the land, and only Russia left as a landbased threat to France. He also explores the changes in Napoleon's life and mind: his divorce from Josephine, his marriage to Maria Louisa, his friendship with the Emperor Alexandera friendship that turned to deep enmity. Last but not least, he shows us Napoleon adrift in a world strange to him as the tried to fight a war different from any of his previous campaigns: a war across vast expanses of open land, in which he could not pin his enemy down and force him to a decisive combat, as he had so often done in Italy and Germany. Hazlitt also explores how Napoleon's campaigns in Spain also led him into unfamiliar modes of operation and political situations that did not fit the models he had used up to that time.

Hazlitt was a lifelong admirer of Napoleon and of the French Revolution, but his admiration was not blind. His analysis is both passionate and clearsighted. At this stage in Napoleon's career, he focuses more on the great evens, less on the man and his mind. It is an appropriate focus; at this stage in his life, Napoleon's whole existence was wrapped up in those great events, his personal life was submerged in them.

The Life of Napoleon was originally published in four volumes in 18281830, not long before Hazlitt's death. It was later republished in a limited edition of six volumes by the Grolier Society. This audiobook is based on that edition. A Freshwater Seas production.

The Life of Napoleon: Volume 4