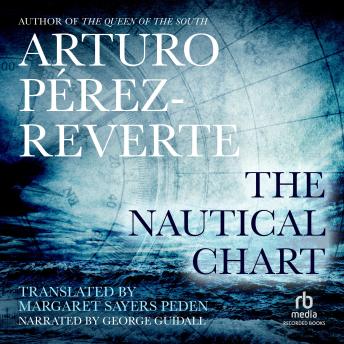 International best-selling author Arturo Perez-Reverte, a celebrated master of smart, gripping thrillers, draws favorable comparisons to such literary legends as Herman Melville, Joseph Conrad, and Patrick O'Brian. Translated into 19 languages, his books have sold more than three million copies worldwide. At a maritime auction in Barcelona, Merchant Marine officer Manuel Coy sees an intense bidding war erupt over a seemingly innocuous 18th-century atlas. The auction winner is the beautiful Tanger Soto, who is obsessed with a Jesuit ship sunk by pirates in the 17th century. Joining forces, Tanger and Manuel hit the seas in search of Dei Gloria and its precious, yet unidentified, cargo. Their quest sends them not only into dangerous waters, but also into the perilous recesses of the human heart. Full of adventure and suspense, The Nautical Chart is a masterful romance of the sea. George Guidall's thrilling reading makes for an unforgettable listening experience.

This title is due for release on July 27, 2012
We'll send you an email as soon as it is available!