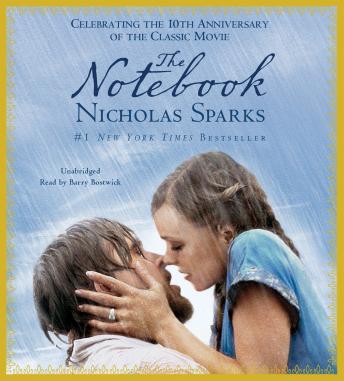 Experience the unforgettable, heartbreaking love story set in post-World War II North Carolina about a young socialite and the boy who once stole her heart -- one of PBS's 'Great American Reads'.

Every so often a love story so captures our hearts that it becomes more than a story -- it becomes an experience to remember forever. The Notebook is such a book. It is a celebration of how passion can be ageless and timeless, a tale that moves us to laughter and tears and makes us believe in true love all over again . . .

At thirty-one, Noah Calhoun, back in coastal North Carolina after World War II, is haunted by images of the girl he lost more than a decade earlier. At twenty-nine, socialite Allie Nelson is about to marry a wealthy lawyer, but she cannot stop thinking about the boy who long ago stole her heart. Thus begins the story of a love so enduring and deep it can turn tragedy into triumph, and may even have the power to create a miracle . . .