The THE SECRET OF THE COSMOGRAPHER: Book One of the Time Squatters Series 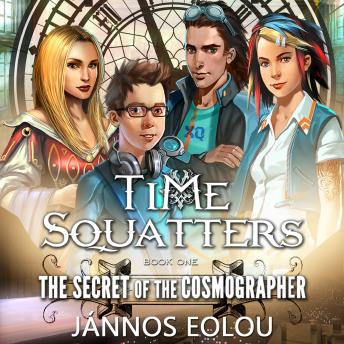 TIME SQUATTERS is a new historical science fiction time travelling saga. Blurring the line between reality and imagination, bridging historical events to fiction, the TIME SQUATTERS take you on a journey back in time but also in the future.

Join them in quests where they solve scientific mysteries, try to uncover secret societies and well kept secrets to better the world. Challenge your knowledge, search for the truth behind myths as well as lies beneath the truth.


Forsten, takes a last look on his screen. 'Don't loose them out of your sight for a moment. Let them think they are invincible, that we've got no clue', he urges his security team. He watches Alex (15), Max (9), Phoebe (14) and Rosie (16) through the hidden surveillance cameras of the Museum. The Ark is the largest and most glorious 'Museum of the Old Life' in Virtus, a city in the far future. What he doesn't know is that Rosie was born in Cambridge in 1664 and was brought over to future in one of the TIME SQUATTERS time travels. Nor does he know that they are about to travel to the Hellenistic Alexandria of the 300 AD, the palace of Rudolf II in Prague (1600), the London Tower (1300), and more, to discover alchemical secrets that would help them uncover secrets hidden in a Kepler's drawing: the Secret of the Cosmographer. In order to succeed they must find out what secret knowledge Isaac Newton, Leibniz, Fermat, Tadeas Hajek, Ramon Llull, and other historical personalities like Magellan shared. It is a hell of a trip they are about to set for, all on their own. World is a hostile place anyway...


The Secret of the Cosmographer: Book One of the Time Squatters Series

A story about history and science. A story of mystery and action.

A story about friendship, loyalty and strength.

THE SECRET OF THE COSMOGRAPHER: Book One of the Time Squatters Series

This title is due for release on September 14, 2018
We'll send you an email as soon as it is available!