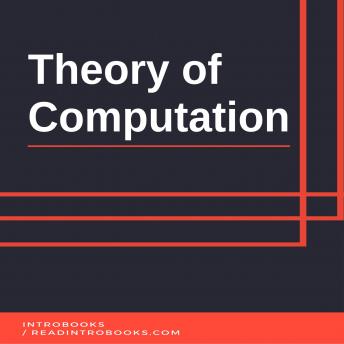 
Automata Theory Formal Language TheoryComputability TheoryComputational Complexity TheoryHere, it should be noticed that many theories treat Automata Theory and Formal Language Theory as individual concepts. It is same for vice versa situation. Many treat them as a whole. In this book, they are described as individual concepts. However, you will find many connections between their concepts. The whole structure of computation theory is dedicated to describe the capabilities and limitations of modern computer system; in terms of solving a particular problem, (This process includes various steps and operations).


Model of computations are mathematical abstractions of computers and their functionality. These models are used to descriptive studies and researches related to computers and various functions provided by them (capabilities, limitations, etc). These computational models are divided in various types according to the characteristics and results they provide. Turning machine is one of these many models of computations. This model is being referred here since it is arguably the most reasonable and powerful model compared to other computational models. This model has a simple and straightforward structure that is easy to interpret and understand which makes the formulation and analyzing process much easier. Other models consider that infinite memory capacity is essential in order to provide results related to decidable problems. However, turning machine requires only a finite amount of memory in order to solve and provide results for a decidable problem. It means that if a turning model is capable of solving a problem; the very same problem can be solved using any other computer that has a finite amount of available memory.


However, some researchers denied the turning model being the most reliable model. They do not deny its functions or capabilities, but they do point out some limitations ignoring the fact that they are yet to be proven practically.

This title is due for release on May 20, 2016
We'll send you an email as soon as it is available!