The Therapist: A Novel 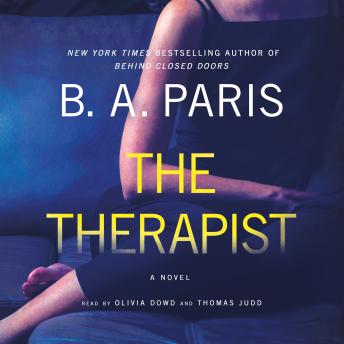 '...you’ll find yourself listening to the suspenseful reading by Olivia Dowd and Thomas Judd way past your bedtime.' -- NJ.com

The multimillion-copy New York Times bestselling author B.A. Paris returns to her heartland of gripping psychological suspense in The Therapist—a powerful tale of a house that holds a shocking secret.

When Alice and Leo move into a newly renovated house in The Circle, a gated community of exclusive houses, it is everything they’ve dreamed of. But appearances can be deceptive…

As Alice is getting to know her neighbours, she discovers a devastating secret about her new home, and begins to feel a strong connection with Nina, the therapist who lived there before.

Alice becomes obsessed with trying to piece together what happened two years before. But no one wants to talk about it. Her neighbors are keeping secrets and things are not as perfect as they seem…