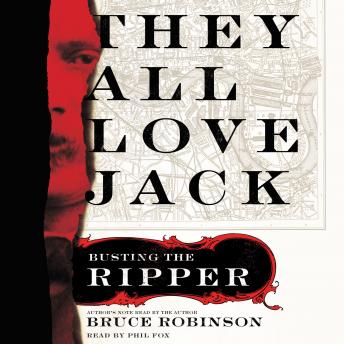 The iconoclastic writer and director of the revered classic Withnail & I—"The funniest British film of all time" (Esquire)—returns to London in a decade-long examination of the most provocative murder investigation in British history, and finally solves the identity of the killer known as "Jack the Ripper."

In a literary high-wire act reminiscent of both Hunter S. Thompson and Errol Morris, Bruce Robinson offers a radical reinterpretation of Jack the Ripper, contending that he was not the madman of common legend, but the vile manifestation of the Victorian Age's moral bankruptcy.

In exploring the case of Jack the Ripper, Robison goes beyond the who that has obsessed countless others and focuses on the why. He asserts that any "gentlemen" that walked above the fetid gutters of London, the nineteenth century's most depraved city, often harbored proclivities both violent and taboo—yearnings that went entirely unpunished, especially if he also bore royal connections. The story of Jack the Ripper hinges on accounts that were printed and distributed throughout history by the same murderous miscreants who frequented the East End of her Majesty's London, wiping the fetid muck from their boots when they once again reached the marble floors of society's finest homes.

Supported by primary sources and illustrated with 75 to 100 black and white photographs, this breathtaking work of cultural history dismisses the theories of previous "Ripperologists." A Robinson persuasively makes clear with his unique brilliance, The Ripper was far from a poor resident of Whitechapel . . . he was a way of life.