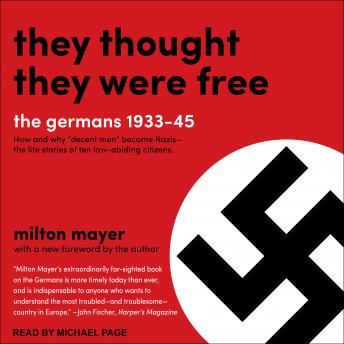 First published in 1955, They Thought They Were Free is an eloquent and provocative examination of the development of fascism in Germany. Milton Mayer's book is a study of ten Germans and their lives from 1933-45, based on interviews he conducted after the war when he lived in Germany. Mayer had a position as a research professor at the University of Frankfurt and lived in a nearby small Hessian town which he disguised with the name 'Kronenberg.' 'These ten men were not men of distinction,' Mayer noted, but they had been members of the Nazi Party; Mayer wanted to discover what had made them Nazis.