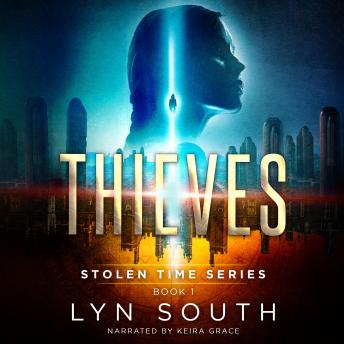 One time traveling thief with revenge in her blood. One man she can trust. A choice to save the future or unwittingly destroy it.


2533 CE. The only thing Clémence Arseneau has left to steal is her freedom. But after one of her rogue heists threatens to expose her employer’s illegal operations, she must prove she’s not a liability with one final job. And though her lover is on the team to help, so is a spy with a hidden agenda.


Traveling to Tudor England to rob Henry VIII, Clémence begins to suspect there is more to this caper than she was told. And when the opportunity to right a terrible wrong arises, she loses sight of the score, focusing instead on vengeance. But fulfilling her vendetta would have devastating consequences… including losing the man who’s captured her heart.Will Clémence destroy her future in the name of revenge?


Thieves is the pulse-pounding first book in the Stolen Time series. If you like feisty heroines, thrilling action, and historical twists, then you’ll love Lyn South’s high-stakes tale.

This title is due for release on December 23, 2020
We'll send you an email as soon as it is available!