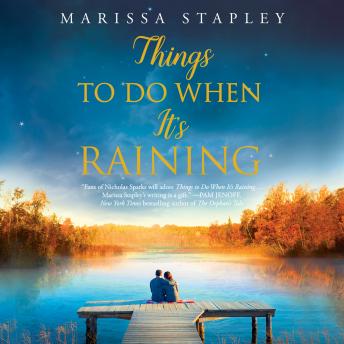 Things To Do When It's Raining

From the auhor of Lucky, A REESE’S BOOK CLUB PICK!

"Fans of Nicholas Sparks will adore Things to Do When It's Raining... Marissa Stapley's writing is a gift." —Pam Jenoff, New York Times bestselling author

When secrets tear love apart, can the truth mend it?

Mae Summers and Gabe Broadbent grew up together in the idyllic Summers’ Inn, perched at the edge of Alexandria Bay in upstate New York. Mae was orphaned at the age of six and Gabe needed protection from his alcoholic father, so both were raised under one roof by Mae’s grandparents, Lily and George.

A childhood friendship quickly developed into a first love—a love that was suddenly broken by Gabe’s unexpected departure. Mae grew up and got over her heartbreak, and started a life for herself in New York City.

After more than a decade, Mae and Gabe find themselves pulled back to Alexandria Bay by separate forces. But Mae finds her grandparents in the midst of decline and their past unravelling around her, because of a terrible secret that was never meant to be revealed--one that will change Mae's future forever.

With honesty and heart, Marissa Stapley reminds us of the redemptive power of love and forgiveness, and that, ultimately, family is a choice.