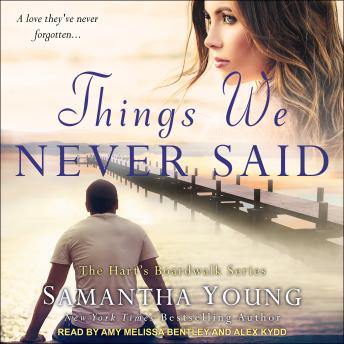 Local metalsmith and gift shop owner, Dahlia McGuire, likes her quiet life in Hartwell, Delaware. It's the perfect place to hide from her family and the tragic events that led to their estrangement. However, when her father, the person she loves most in the world, needs her Dahlia has no choice but to return to Boston to face her ghosts. One of those happens to be her ex-boyfriend's best friend, Michael Sullivan. The man she was never supposed to fall in love with.

Michael Sullivan has never forgotten Dahlia McGuire. Some might say he's never gotten over her. For years he lived with the anger of her desertion, and now, newly-divorced, he's finally ready to move on. That proves impossible when Dahlia returns to Boston and reawakens their explosive connection. Despite everything, Michael wants her back, but Dahlia can't seem to let go of the tangled emotions of the past. When she flees home to Hartwell, Michael follows, determined to do everything in his power to convince her they belong together.

However, when the unthinkable hits the quiet seaside town, Michael finds himself trying to unravel more than the mystery of Dahlia's broken heart. It's time for truths left unsaid to finally be spoken or Michael and Dahlia might find themselves torn apart forever . . .