Think BIG and Kick Ass in Business and Life 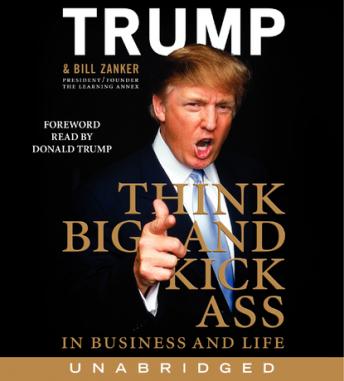 Donald J. Trump is an icon: the very definition of the American success story. President-elect, reality-television star, and developer of some of the planet's most prestigious real estate, he's also become one of the world's wealthiest men.

Trump is a living example of how thinking BIG and knowing when to back up your opinions aggressively—regardless of what your critics or opponents might say—can help you maximize your personal and professional achievements. In his first political campaign, Trump defeated his opponents by rallying voters nationwide to 'Make America Great Again.' For the first time ever, you too can learn Trump’s secrets to thinking BIG and kicking ass! Learn:


- Momentum: the Big Mo. How to get it and how to get it back.
- Revenge: how and when to get it (and why it's so sweet).
- 'I love you, now sign this!' Why contracts in business and personal life are so important.
- Real-life stories from people who've applied the think BIG formula in their own lives.

These strategies are proven and attested to by those who've learned to think BIG from Donald Trump and found success in their own lives even when the world seems to be against them. Co-authored with Bill Zanker, an entrepreneur who learned these tactics firsthand from Trump, Think BIG and Kick Ass shows you how to bring a winning attitude to everything you do.

Think BIG and Kick Ass in Business and Life