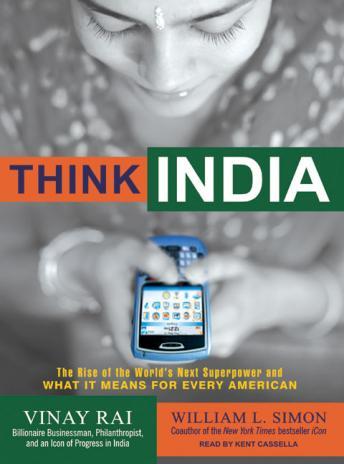 Think India: The Rise of the World's Next Superpower and What It Means for Every American

The buzzword of the twenty-first century is India-and it's not just a story of software, outsourcing, and faraway call centers. With the economy soaring at 8 percent a year, India is a medical and pharmaceutical front-runner, an R&D powerhouse, a rising manufacturing hub, and an up-and-coming cultural trendsetter in areas from fashion to film. And the world is taking note: Western companies from Lockheed Martin to McDonald's are moving in, Ford is setting up factories, Coca Cola is heading to the countryside in rickshaws, and research centers for Fortune 500 companies are popping up everywhere. Meanwhile, the U.S. military is forging close ties, as India has become a key strategic partner.

Steel-tycoon-turned-educator Vinay Rai, who now runs one of India's two private universities-with fifteen campuses-couples with sociology professor William Simon to map out the rising new India. This colorful, lively, forward-looking account of India's stunning world debut is essential reading for anyone who wants to understand India's new muscle on the global stage.

- One out of every six people in the world lives in India.

- India is the world's top destination for retailers.

- India has the world's youngest workforce (over 500 million under twenty-five).

Think India: The Rise of the World's Next Superpower and What It Means for Every American

This title is due for release on August 30, 2007
We'll send you an email as soon as it is available!