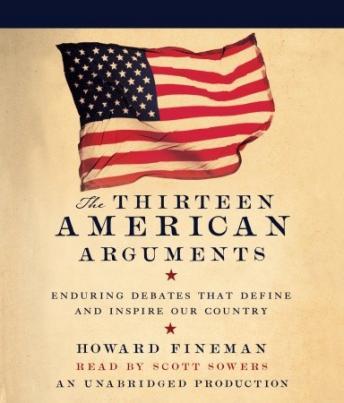 The Thirteen American Arguments: Enduring Debates That Define and Inspire Our Country

Howard Fineman, one of our most trusted political journalists, shows that every debate, from our nation’s founding to the present day, is rooted in one of thirteen arguments that–thankfully–defy resolution. It is the very process of never-ending argument, Fineman explains, that defines us, inspires us, and keeps us free. At a time when most public disagreement seems shrill and meaningless, Fineman makes a cogent case for nurturing the real American dialogue. The Thirteen American Arguments runs the gamut, including

• Who Is a Person? The Declaration of Independence says “everyone,” but it took a Civil War, the Civil Rights Act, and other movements to make that a reality. Now, what about human embryos and prisoners in Guantanamo?
• The Role of Faith No country is more legally secular yet more avowedly prayerful. From Thomas Jefferson to James Dobson, the issue persists: Where does God fit in government?
• America in the World In Iraq and everywhere else, we ask ourselves whether we must change the world in order to survive and honor our values–or whether the best way to do both is to deal with the world as it is.

Whether it’s the nomination of judges or the limits of free speech, presidential power or public debt, the issues that galvanized the Founding Fathers should still inspire our leaders, thinkers, and fellow citizens. If we cease to argue about these things, we cease to be. “Argument is strength, not weakness,” says Fineman. “As long as we argue, there is hope, and as long as there is hope, we will argue.”