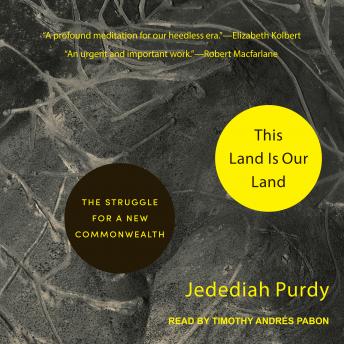 This Land Is Our Land: The Struggle for a New Commonwealth

Today, we are at a turning point as we face ecological and political crises that are rooted in conflicts over the land itself. But these problems can be solved if we draw on elements of our tradition that move us toward a new commonwealth-a community founded on the well-being of all people and the natural world.

From the coalfields of Appalachia and the tobacco fields of the Carolinas to the public lands of the West, Jedediah Purdy-one of our finest writers and leading environmental thinkers-shows how the land has always united and divided Americans, holding us in common projects and fates but also separating us into insiders and outsiders, owners and dependents, workers and bosses. Expropriated from Native Americans and transformed by slave labor, the same land that represents a history of racism and exploitation could, in the face of environmental catastrophe, bind us together in relationships of reciprocity and mutual responsibility.

This may seem idealistic in our polarized time, but we are at a historical fork in the road, and if we do not make efforts now to move toward a commonwealth, Purdy warns, environmental and political pressures will create harsher and crueler conflicts-between citizens, between countries, and between humans and the rest of the world.