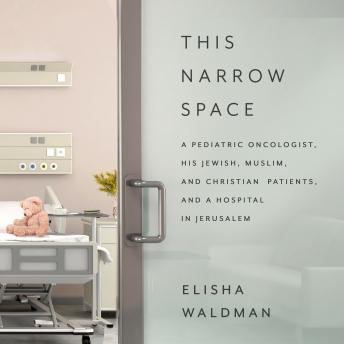 This Narrow Space: A Pediatric Oncologist, His Jewish, Muslim, and Christian Patients, and a Hospital in Jerusalem

Waldman's years at Hadassah were filled in equal measure with a deep sense of accomplishment, with frustration when regional politics sometimes got in the way of his patients' care, and with tension over the fine line he would have to walk when the religious traditions of some of his patients' families made it difficult for him to give these children the care he felt they deserved. Navigating the baffling Israeli bureaucracy, the ever-present threat of war, and the cultural clashes that sometimes spilled over into his clinic, Waldman learned to be content with small victories: a young patient whose disease went into remission, brokenhearted parents whose final hours with their child were made meaningful and comforting.

As he sought to create both a personal and a professional life in his new home, Waldman struggled with his own questions of identity and belief, and with the intractable conflict between Israelis and Palestinians that had become a fact of his daily life. What he learned about himself, about the complex country that he was now a part of, and about the heartbreakingly brave and endearing children he cared for-whether they were from Me'ah She'arim, Ramallah, or Gaza City-will move and challenge readers everywhere.