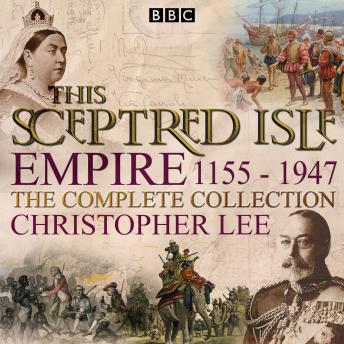 Britain had the biggest empire the world has ever known. At one time a quarter of the global land mass was British. Over a third of the world was insured at Lloyds. At his coronation, more than 400 million people saluted George V. Truly, the sun never set on this historical phenomenon. Whatever the day, whatever the hour, somewhere on the globe, the empire worked and played the British game, often absurdly so.

BBC Radio 4's monumental history of Britain tells the story of the British Empire from its earliest beginnings through the years when British influence grew steadily around the globe, years when Britain took full advantage of the technical advances of its industrial revolution.

Here are the origins of the modern nations of America, Canada, Australia, New Zealand, South Africa, and of the ways in which British influence has affected, for better or for worse, nations such as India, Sri Lanka, and China. Here are the stories, not always happy and glorious, of Captain James Cook, Mungo Park, Warren Hastings, Sir Stamford Raffles, and David Livingstone.

The story of the British Empire is one of enormous personalities, adventure, scientific and maritime development, and the building of one of the most complex international administrations the world has ever seen.