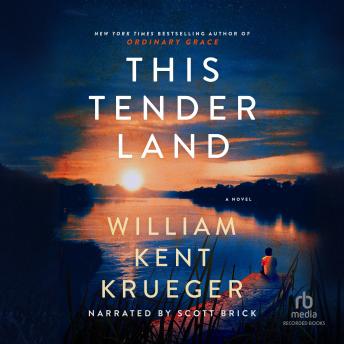 For fans of Before We Were Yours and Where the Crawdads Sing, a magnificent novel about four orphans on a life-changing odyssey during the Great Depression, from the New York Timesbestselling author of Ordinary Grace. 1932, Minnesota-the Lincoln School is a pitiless place where hundreds of Native American children, forcibly separated from their parents, are sent to be educated. It is also home to an orphan named Odie O'Banion, a lively boy whose exploits earn him the superintendent's wrath. Forced to flee, he and his brother Albert, their best friend Mose, and a brokenhearted little girl named Emmy steal away in a canoe, heading for the mighty Mississippi and a place to call their own. Over the course of one unforgettable summer, these four orphans will journey into the unknown and cross paths with others who are adrift, from struggling farmers and traveling faith healers to displaced families and lost souls of all kinds. With the feel of a modern classic, This Tender Land is an en'thralling, big-hearted epic that shows how the magnificent American landscape connects us all, haunts our dreams, and makes us whole.

I enjoyed this book and feel sad that its over. I especially like how the book wrapped up.

Wonderful book that I'd listen to again! Each chapter was full of new challenges for the 4 lovable vagabonds. I hated for it to end.

This was an enjoyable read. It had me crying at points. Yet I never knew what was waiting around the corner.

Loved the tales of the four vagabonds and their adventures in search of their dreams. Beautifully written, a well paced narrative that kept this reader engaged and in anticipation of the next chapter.

I’d read a few of the Cork O’Conner novels and enjoyed them. Wasn’t at all disappointed with this diversion. Author keeps you on the edge of your seat as usual, and his sympathetic view of the treatment of 1st Nation Americans is still evident. Your heart is constantly in your mouth for the little band of four and you pray they’ll stay safe. Could have ended better but a great read on the whole.

Excellent story and a terrific narrator!

Great read. It kept me interested to the very end.

Did not want this to end! Mix between Anne With an E and Where the Crawdads Sing.

More than a great story, this book brings the Great Depression era in the middle of our county alive illustrating both the ugliness and the beauty of the individuals and institutions that survived it. William Kent Krueger is a master storyteller and creative, heart centered “ historian”!

Both this book and Ordinary Grace are tremendous. Touching and historically engaging.

The story was good and I really liked it. It kept me interested during the entire time and never got bored with it

Great book. Sad it is over

I rated this book low because of the violence against children and for a misrepresented view of God. I did finish the book but was very disappointed in the ending. Giving Emma special powers was really out there. I would not recommend this book to any of my friends

The story was engaging and sometimes riveting. A different sort of "coming of age" with enough surprise and twists to keep ones interest. The climax is not predictable yet fits well with the tale up to that point. There are several very moving parts. The story was so well structured, I was waiting for the author ( in his postscript) to say it was autobiographical. The narrator was excellent. And having lived in St. Louis in the 1980's, I enjoyed the local "color".

what a pleasant surprise this story was, well narrated, I highly recommend this book.

I loved this book! Character development was unmatched. The journey was amazing and the end was perfectly tied up.

I loved this book. It reads like a classic, strong story, rich in history and filled with adventure. Some described it a bit like Tom Sawyer. I tend to agree. It’s not a story that would happen today, but it gives us a glimpse into our own history and inequities.

I enjoyed this book very much until the end. I didn’t like the rushed ending.

A powerful, beautiful story, read by the perfect narrator.

What a wonderful story, tue characters were so richly developed and I really like the narrator. It does make it easier to follow the story when different inflections are used, but I find it annoying when men do a high-pitched woman’s voice. This narrator didn’t do that, he just used a subtle difference for women’s voices and it was seamless.

I love the story line it was captivating

What a wonderful story about the goodness and the evil of humanity. The difficulties of the people that lived through the depression and the injustices of the Native American people were brought to life. It was a beautiful story of love and kindness and family.

A different type of book to what I have listened to but loved it. It did remind me of a modern day Huckleberry Finn which was mentioned at the end of the book. Some interesting directions.

A very well written tale set during the Depression of four children making their way to better lives in the upper Midwest. Loved the changing interplay amongst them as the dealt with life's challenges.

Thank you for writing this, a great story

I really enjoyed listening to this book. I could stop listening. A very engaging tale.

Fantastic! Book brings the characters to life. I never forgot that it was fiction, but I cried buckets when bad things happened, celebrated when good things happened, smelled the odors, and so forth. Outstanding book - highly recommended.

One of the best books I have ever read. A true classic

I found this book interesting. It grabbed me right away. I really felt for the characters and I thought the narrator did a great job!

Started out a bit slow but picked up quickly. Really enjoyed it!

Great listen.. loved the authors notes at the end.. definitely did his research about the time period.. Well worth it!

Exceptional both in the story and the narration. Compelling and thoughtful, it balances good and evil in an era most Americans don’t think about, but is still in our collective memories and fears. Don’t miss this one!

Wow, just WOW!! This book never stops twisting and turning, even to the very end! I loved this book so much and was always disappointed to arrive at my destination because I would have to wait to hear what happened next. The narrator is the absolute best I have ever heard. I am quite looking forward to listening to some other books by WKK.

gripping - really rang true, and was so poignant.

Solid book, an epic tale. Heartbreaking and endearing. The ending is quite phenomenal. Being from Minnesota I really enjoyed hearing about all the places along the River but wouldn’t detract from it if you didn’t know the places.

What a refreshing tale that has every element of a perfect story. There is no way to not love this book. Also, I’ve been so annoyed lately with overzealous narrators. This performance restored my faith that not reader is breathy, gaspy, and sing songy.

Excellent book right up to the end!

Fantastic story that kept my interest to the very end.

Loved the story and the narration. I am anxious to read more books by William Kent Kruger.

This book is Sanctimonious preachy . I don't want to finish it and I wish I could remove it from my books Narrator is really awful

This book was heart wrenching but lovely. Though the story itself is fictional, I learned a lot about the time period and enjoyed to story. The narrator was fabulous.

I enjoyed I found it very interesting and really kept my attention. Hated for it to end

Very well written. Cast of characters was phenomenal. I really was pulled into the lives of these young people. The epilogue was very much appreciated. We always want to know what happened to so and so. Well done Mr. Krueger.

Poignant & compelling story with twists & turns to keep you wondering "just what will happen next?'.

I loved this book.. It kept my interest and I didn’t want to stop listening. Narrator was awesome!! Highly recommend

The book is enjoyable but I found the book moralistic and preachy. A good teenage read.

This book is fantastic!!! I could not quit listening! Highly recommend!

This book definitely held my interest as the journey of the four kids was adventurous and full of challenges and surprises. There was always something going on and the story never felt as if it got static. The narrator did a good job, even if I did not get the sense that he was as the narrator of the book states, 80 years old.

Love this book couldn’t stop listening to it

Narrator had a calming voice. The story seemed to be all over the place. Reminded me a little of Huck Finn at times.

Great insight into that period in history the tragic abuse of the indigenous children and a tale of enlightenment. Enjoyed this read

After living a short time in Minneapolis I was able to recognize many of the areas mentioned and it brought back memories. It was a slow start for me but ended up coming full circle to genuine enjoyment.

good story. a little predictable. Narrator could have been a little more in the dialect of the situation.

I am astounded that this book Has been compared to where the crawdads sing. This book is very dark, very long, and with little redeeming qualities at the end. I almost quit halfway through, but Read on in hopes of a turn of mood, and a wonderful ending, neither of which came about.

WKK’s Ordinary Grace was extraordinary. Unfortunately, This Tender Land was not. Filled with over used stereotypes and cliches, I found it simply shallow and uninteresting. The psycho head mistress, the orphanage pedophile, the con-artist faith healer, the lesbian couple, the prostitute, and on and on. And ... seriously ... if you ‘just believe’ you will be healed? You can do better WKK.

I am not a fan of the narrator so I will just say I wish I read the book instead of listened to it. Which I probably will do - I loved Ordinary Grace.

Great listen! Kept our interest with plot twists & turns. Wrapped up nicely at the end, and had a nice author's note. Well read/narrated.