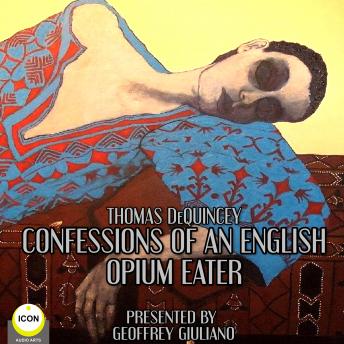 "Here was the secret of happiness, about which philosophers disputed for so many ages, at once discovered; happiness might now be bought for a penny, and carried in the waistcoat-pocket; portable ecstasies might be had corked up in a pint-bottle; and peace of mind sent by the mail." THOMAS DE QUNICEY
Confessions of an English Opium-Eater is a graphic, honest, autobiographical account written by Thomas De Quincey, about his laudanum addiction and its profound effect on his life. Confessions was the first major work De Quincey published and the one which won him lasting fame. This intensely riveting audiobook edition Is therefore a must for all those interested in the pharmacological arts, altered states, the pitfalls of addiction and the age old quest for expanded consciousness.
GEOFFREY GIULIANO is the author of thirty two internationally best selling books published by the biggest publishers in the world from 1984 until today. He is also an acclaimed Hollywood film actor, director, designer, and is the voice on over 500 popular audiobooks.
Series producer Avalon Giuliano in New York
Produced by Alex Franchi in Milan
Edited and mixed by Macc Kay in Bangkok
Intern Eden Garret Giuliano