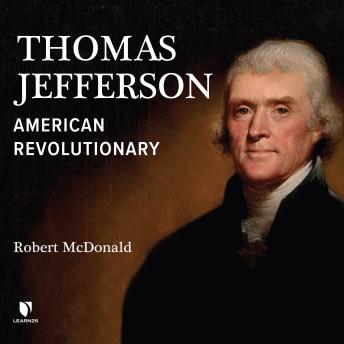 Explore the captivating contradictions of one of U.S. history's most divisive figures with the celebrated West Point professor and author of Confounding Father: Thomas Jefferson's Image in His Own Time.

Thomas Jefferson was the first secretary of state, second vice president, and third president of the United States. A polymath who championed education and religious freedom, he drafted the Declaration of Independence and made more attempts than any other officeholder of his generation to end slavery. Yet he remained a slaveholder throughout his life. A diplomat who charmed people abroad, at home he was a lightning rod of controversy-both loved and hated, revered and reviled.

Join West Point history professor Robert McDonald as he tells the story of the life of one of history's most fascinating men. In 15 engrossing lectures, McDonald-a noted expert on Jefferson, the American Revolution, and the Early Republic-seeks to explain Jefferson as a man of his times. The results will by turns surprise, delight, and confound you, challenging what you think you know about the third president's life and era.