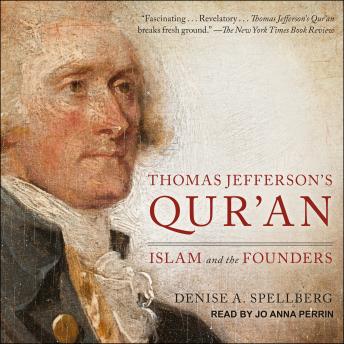 Written By: Denise A. Spellberg

In this original and illuminating book, Denise A. Spellberg reveals a little-known but crucial dimension of the story of American religious freedom-a drama in which Islam played a surprising role. In 1765, eleven years before composing the Declaration of Independence, Thomas Jefferson bought a Qur'an. This marked only the beginning of his lifelong interest in Islam, and he would go on to acquire numerous books on Middle Eastern languages, history, and travel, taking extensive notes on Islam as it relates to English common law. Jefferson sought to understand Islam notwithstanding his personal disdain for the faith, a sentiment prevalent among his Protestant contemporaries in England and America. But unlike most of them, by 1776 Jefferson could imagine Muslims as future citizens of his new country.

Based on groundbreaking research, Spellberg compellingly recounts how a handful of the Founders, Jefferson foremost among them, drew upon Enlightenment ideas about the toleration of Muslims (then deemed the ultimate outsiders in Western society) to fashion out of what had been a purely speculative debate a practical foundation for governance in America.

by Denise A. Spellberg