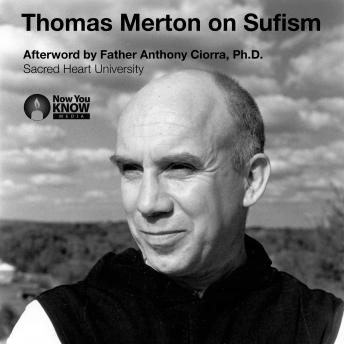 In the 1960s, Thomas Merton, one of the twentieth century’s great mystics, encountered the ancient Islamic mystical tradition of Sufism. The result was an outpouring of mystical insight and spiritual wisdom.

In these talks recorded by Merton during the last two years of his life, you will discover what first inspired Merton. The Sufi mystics have given us: one of the world’s most read poets, Rumi; the beautiful mystical dance of whirling dervishes; interreligious insight; and new forms of contemplation. A visionary who sought to synthesize the best of Eastern and Western spiritualties, Thomas Merton’s profound interest in the Sufi mystics is more relevant today than ever.

Merton explores the contemplative wisdom of Sufism to enhance our Christian understanding of mysticism and spiritual practice. In one of his talks to the novices at Gethsemani, he said, “The Sufis are seeking to know God and have ways of seeking to know God, and this should have some success with us. . . . We should be closer to the Sufis. ”

In these talks, you will watch the development of Merton's spirituality as he moved towards a greater understanding of interreligious dialogue. Merton believed that the Sufis had much to teach us about prayer, mysticism, and contemplation.

Merton will bring you to new and exciting places as he reflects on Sufism and the mystical life. What Merton taught in the mid-twentieth century is prophetic for spiritual seekers in the contemporary world.

This set includes an afterword by Fr. Anthony Ciorra.

Photograph of Thomas Merton by Sybille Akers. Used with permission of the Merton Legacy Trust and the Thomas Merton Center at Bellarmine University.

This title is due for release on May 21, 2014
We'll send you an email as soon as it is available!