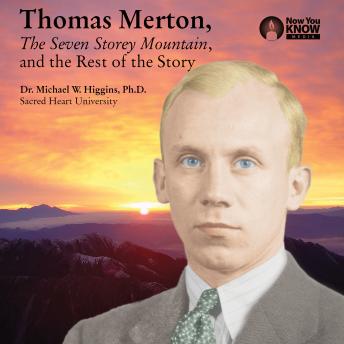 Thomas Merton, The Seven Storey Mountain, and the Rest of the Story

When Thomas Merton published The Seven Storey Mountain in 1948, no one could have expected it to become an international sensation. An autobiography of his conversion to Catholicism, it became a wildly popular bestseller, propelling this humble Trappist monk to literary fame. Today, it is widely regarded as a spiritual classic.

While it remains his most famous work, The Seven Storey Mountain is only the tip of the iceberg in Merton's rich, multi-layered oeuvre. In Thomas Merton, The Seven Storey Mountain, and the Rest of the Story, you will join award-winning professor and speaker Michael W. Higgins in exploring Merton's compelling autobiographical literature. As you examine his journals, letters, novels, and poetry, you will encounter a brilliant portrait of the premier Catholic spiritual figure of the twentieth century.

Although The Seven Storey Mountain cemented Thomas Merton as a prominent writer, he also felt that it presented a limited portrait of him. Indeed, his later autobiographical works, such as Conjectures of a Guilty Bystander and The Asian Journal, show a more mature and fully realized vision. The Seven Storey Mountain would establish many of Merton's most powerful themes-his later works brought these themes to their apex.

In this course, you will examine the writings of this modern and post-modern chronicler of the soul's unfolding. Encounter Thomas Merton-the man, monk, and mystic-today.

Thomas Merton, The Seven Storey Mountain, and the Rest of the Story