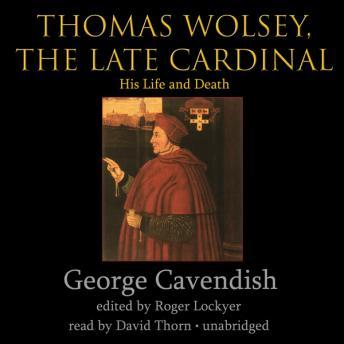 Thomas Wolsey, the Late Cardinal: His Life and Death

This extraordinary “eye-witness” account of Cardinal Thomas Wolsey’s rise and fall from power was written between 1554 and 1558 by his gentleman-usher, George Cavendish, who was privy to so much of the Cardinal’s ambitious endeavors. However, Cavendish prudently waited a long time before chronicling his observations for fear of his life, as there were those who may have take his memoirs the wrong way.
Cavendish describes in great detail the daily life of Wolsey, listing his huge household of servants to give a good idea of the magnitude of this larger-than-life man who outdid Henry VIII in lifestyle and riches, which was his undoing. Throughout the book, he records Wolsey’s endless acquisitions of bishoprics—including the very rich monastery of St. Albans, even though he was never a monk—all to feather his already very wealthy nest. Cavendish also tells of Wolsey’s scheme to put himself over and above the Archbishop of York, the senior prelate in England, later to be named Pope. Wolsey is eventually charged with treason but dies in Leicester, and it is said that had he not died, he would have been more than likely subject to a beheading.
Cavendish also delves into the lives of King Henry VIII, Anne Boleyn, the infamous Duke of Norfolk, and other prominent figures of the Tudor period, all to bring the sixteenth century to vivid life.
This rare document, considered “the most important single source for our knowledge of Wolsey,” was edited for easy comprehension by Roger Lockyer, a former faculty member of Royal Holloway College, University of London, and an authority on the tumultuous Tudor period which was so pivotal in England’s storied history.

Thomas Wolsey, the Late Cardinal: His Life and Death

This title is due for release on April 28, 2010
We'll send you an email as soon as it is available!