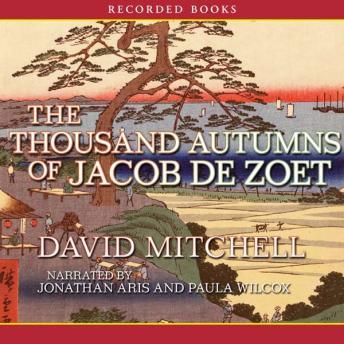 A Booker finalist and Mail on Sunday/John Llewellyn Rhys Prize winner, David Mitchell was called 'prodigiously daring and imaginative' by Time and 'a genius' by the New York Times Book Review. With this sweeping work of historical fiction, he confirms his place among the world's greatest novelists. In 1799, the artificial island of Dejima lies in Nagasaki Harbor as the Empire of Japan's de facto gate blocking Western influence. Here, at the farthest outpost of the Dutch East Indies Company, Jacob de Zoet comes to make his fortune before reuniting with his fiancEe in Holland. But fate takes a dangerous turn when Jacob-who, like all outsiders, is not allowed to set foot on the mainland-falls hopelessly in love with a young Japanese woman. Filled with lush imagery and populated by authentic characters, this epic novel is beautifully complemented by the dual performance of narrators Jonathan Aris and Paula Wilcox. 'Comparisons to Tolstoy are inevitable, and right on the money.'-Kirkus Reviews, starred review '. a dense and satisfying historical with literary brawn and stylistic panache.' -Publishers Weekly, starred review