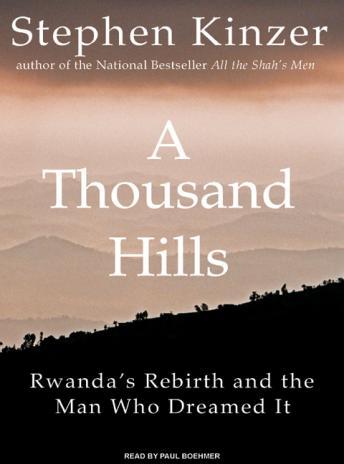 A Thousand Hills: Rwanda's Rebirth and the Man Who Dreamed It

Paul Kagame grew up as a wretched refugee. He and a group of comrades, determined to force their way back home after a generation of exile, designed one of the most audacious covert operations in the history of clandestine war. Then, after taking power, they amazed the world by stabilizing and reviving their devastated country. Now, as President Kagame, he's obsessed with a single outlandish dream: to make Rwanda the first middle-income country in Africa, and to do it in the space of a single generation.

A Thousand Hills tells Kagame's tumultuous life story, including his early fascination with Che Guevara and James Bond, his years as an intelligence agent, his training in Cuba and the United States, the dazzlingly original way he built his secret rebel army, his bloody rebellion, and his outsized ambitions for Rwanda. It is the adventure-filled tale of a visionary who won a war, stopped a genocide, and then set out to turn his country into the star of Africa. Like Ishmael Beah's bestselling A Long Way Gone and Greg Mortenson's Three Cups of Tea, this book recounts the thrilling and uplifting tale of a man who defied the odds to lift himself and his country out of misery toward a more promising future.

Thousand Hills: Rwanda's Rebirth and the Man Who Dreamed It