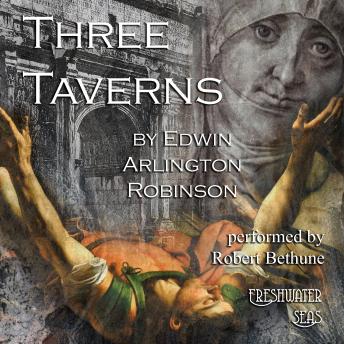 In this collection of dramatic narratives, Robinson explores his key interests: character and man's confrontation with the rocks and hard places of human existence. He gives us a fascinating piece of alternate history: a dialogue between Alexander Hamlton and Aaron Burr, testing who will betray and who will resist. He gives that bitter old man, John Brown, full scope to vent his deep-seated anger, and lets Rahel Varnhagen, in her old age, touch us with her memories of love. The title poem is a vigorous account of himself by St. Paul, seemingly not too long post-Damascus.


As Harriet Monroe wrote:
"One "gets" completely "the inextinguishable grace" of the vagabond in Peace on Earth, and the nothingness of Taskar Norcross,
"a dusty worm so dry
/ That even the early bird would shake his head /
And fly on farther for another breakfast."
But it is in Mr. Robinson's meditative poems that one tastes most keenly the sharp and bitter savor of his high aloof philosophy. He is not for Demos:


"Having all,
/ See not the great among you for the small, /
But hear their silence; for the few shall save /
The many, or the many are to fall-- /
Still to be wrangling in a noisy grave."


He offers no solution of the problem of creation, either in general or in detail, but he presents it in vivid lines:


"There were seekers after darkness in the Valley of the Shadow, /
And they alone were there to find what they were looking for."

"That earth has not a school where we may go /
For wisdom, or for more. than we may know."

"Say what you feel, while you have time to say it-­
Eternity will answer for itself."