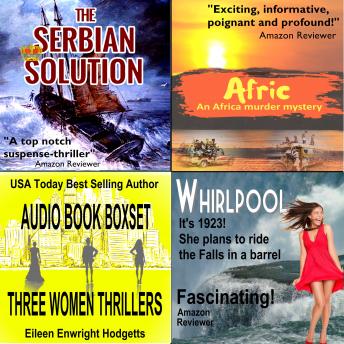 THREE SEPARATE AND DISTINCT THRILLERS... IN ONE AUDIO BOX SET
WhirlpoolA young widow ready to risk everything! Niagara Falls ready to take it all...
The year is 1923 and the jazz age is in full swing. Evangeline Murray, a young widow from Ohio, is recruited by the Women's Freedom Movement to represent the spirit of modern womanhood by plunging over Niagara Falls in a barrel. Evangeline eagerly embraces her opportunity to achieve fame and fortune, until she sees the power of the river and begins to understand the risk she is taking. Joshua McClaren, an enigmatic battle-scarred veteran of World War I, and the best boatman on the river, reluctantly agrees to launch the headstrong Evangeline. Joshua has seen hundreds of bodies surface in the Whirlpool below the Falls, and has faced death on the battlefields of Flanders so he has no respect for the charming, impetuous Mrs. Murray, and her desire for fame. Before the barrel can be launched, each of them will have to face their own demons; painful secrets will be revealed and the Niagara River will claim another life. Inspired by true stories of the Falls, Whirlpool is a romance, an adventure, and the closest that most of us will ever come to taking the fateful plunge over the Falls.
Buy The Three Women Thrillers Audio Box Set today to feel the thrill of plunging over the Falls and into ...?

The Serbian SolutionA kidnapping, a woman's suppressed deadly memory, a nation's future at stake...
In a drug-induced dream in a US hospital, Lizbeth retrieves a suppressed memory from her European childhood. It leads to her own kidnapping and a wild chase across England and Wales in the company of a reluctant American doctor. In a tiny village in western England, a deluded old man dreams of becoming a king. And in a London apartment an old lady, born in the days of the Czars, maintains a guilty secret of tainted royal blood. Set amidst the turmoil at the end of the Cold War, The Serbian Solution is a thrilling tale of adventure and romance, culminating in a desperate final voyage into the Atlantic as a group of veteran soldiers fight to keep an oath made in World War II; to restore a king to his throne.
Buy The Three Women Thrillers Audio Box Set today and get immersed in a deadly chase to attempt to restore a European monarchy!

AfricAn American college girl versus an African warlord. Who wins?
1963 As European colonists flee the Congo, a witch doctor finds an abandoned child and teaches him the power of hatred. A hundred miles to the east, six American hippies on a joy ride across Africa, crash their VW bus into a cemetery. While they wait for repairs they scandalize the local missionaries and Brenda Carter impulsively marries an African student. Fifty Years Later: Brenda Carter brings Sarah, her bright and determined granddaughter to Africa to explore her roots and meet her grandfather; the man Brenda married and abandoned fifty years before. When a Peace Corps worker is murdered, a baby is kidnapped, and all contact with the outside world is severed by a torrential rain storm, Sarah becomes an unwilling investigator into the abandoned boy from the Congo, the truth behind her grandmother's marriage, and fifty years of undercover CIA involv

This title is due for release on January 23, 2019
We'll send you an email as soon as it is available!