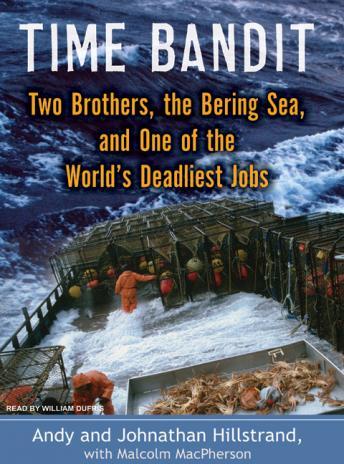 Time Bandit: Two Brothers, the Bering Sea, and One of the World's Deadliest Jobs

The Time Bandit is the fishing vessel that Andy and Johnathan Hillstrand use to hook the 'deadliest catch,' Alaskan king crabs and opilio crabs, in the Bering Sea, a dangerous and mercurial body of water that can steal years from a fisherman's life. The Hillstrand brothers, however, are the real 'thieves.' They take valuable crabs from the sea while facing its dangers head on. In pursuit of their daily catch, the brothers brave ice floes and heaving sixty-foot waves, gusting winds of eighty miles per hour, unwieldy and unpredictable half-ton steel crab traps, and an injury rate of almost 100 percent. There are fewer than 400 fishermen of this kind in the United States, and early death is a common fate. But the Hillstrand brothers are drawn to the drama and adventure of life on the high seas, as was their grandfather before them. They don't complain about the risks and dangers-this is their world.

Time Bandit: Two Brothers, the Bering Sea, and One of the World's Deadliest Jobs