The Time of Their Lives: The Golden Age of Great American Book Publishers, Their Editors and Authors 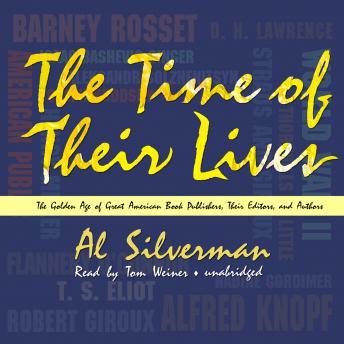 Al Silverman, a noted figure in American publishing, has written a wonderful chronicle of book publishing for all who cherish books. The Time of Their Lives is not only a love song to the industry's golden age, an era that began'after World War II'and lasted for three-plus decades, but it is also a reflection of the tastes and cultural appetites of the American public.

Relying on the eyes, ears, and memories of more than 120 notable publishing figures, including Alfred Knopf, the Doubleday fathers and sons, and the Thornhills of Little, Brown and Company, the author offers an intimate history of never-before-told stories about how some of the most important books in postwar America came into being. Along with houses that go back to the mid-1800s, Silverman covers publishing's post-WWII newcomers such as Roger Straus, who amassed nineteen Nobel Prizes'in his time, and Barney Rosset, whose Grove Press'freed such banned authors as D. H. Lawrence and Henry Miller.'He takes a close look at the paperback revolution of the 1950s and the 1960s and pays particular homage to the Golden Age's talented'horde of editors, who offer marvelous stories about their authors.

It was Arthur Thornhill, Sr., in his years as president of Little, Brown and Company, who said about the occupation he loved, 'I wanted to be part of something that was good.' In this fascinating and elegiac history, Al Silverman illuminates a period in publishing that not only was good but also formed a distinguishing landmark of culture in American life.

'In a difficult publishing era, it's a delight to share these recollections of the days before Wall Street ruled Publishers Row.''Publishers Weekly

Time of Their Lives: The Golden Age of Great American Book Publishers, Their Editors and Authors